Finalists announced for AIDF Asia Innovator of the Year Award 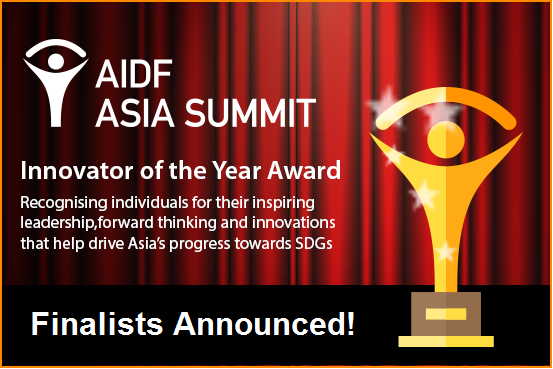 We are pleased to announce the finalists for the AIDF Asia Innovator of the Year Award 2018!

The award celebrates individuals as well as teams who have introduced game-changing initiatives, created research or inventions that have made an impact on the humanitarian aid and development sectors in Asia over the past year. The aim is to recognise individuals for their inspiring leadership, forward-thinking, creative problem-solving and implementation of innovative programmes that have helped drive Asia’s progress towards Sustainable Development Goals.

The winner will be announced at the AIDF Asia Summit 2018 in Bangkok on 20-21 June 2018. Registrations for the summit will close very soon so don’t miss out, register here.

Alice was nominated for her commitment to gender equality and encouraging Committed to Good (CTG) to launch its Female First initiative. Her vision was to empower women in conflict-affected and fragile countries, places where gender equality and women’s empowerment are low on the agenda. Alice launched the Female First Initiative on 8th March 2017 to encourage recruiters, in country teams and clients to rebalance the gender scales when it comes to humanitarian teams on the ground. The 2030 Agenda for sustainable development, and in particular gender equality, is CTG’s primary approach to social responsibility and strives to resolve humanitarian and development changes in all operations, particularly Asia.

Continuous improvement remains part of the process and Alice has pipelined plans to enhance and grow the impact of implemented initiatives to accelerate Asia’s progress towards Sustainable Development Goals on a larger scale.

Thira was nominated for his leading role in preventive medicine and health promotion to improve population health. Thira has been involved in a number of innovative programmes across Thailand, Asia and Internationally. For example, he initiated a pilot program for access to antiretroviral medications for patients with HIV/AIDS in Thailand, namely to Care (ATC), in 1999. ATC was regarded as a foundation of National Anti-retroviral Programme.

Thira has demonstrated a high level of dedication to improving health and healthcare working collaboratively with NGOs, Civil Society, Private Sector and Governments.

Samuel has been nominated for his commitment to spearhead the design and implementation of several creative and impactful projects aimed at improving the living conditions of millions of the most vulnerable families in India. Through his leadership, Habitat India inspires partners in government, the private sector and civil society to volunteer, donate, invest and advocate for decent, affordable housing, for access to clean water and for better hygiene and sanitation practices. Through Rajan’s able leadership, Habitat for Humanity India serves as a voice for people in need of decent housing by working to change laws and shape policies that affect access to housing.

Adequate and affordable housing not only improves outcomes for individuals, but affects communities and the global economy at large. Rajan and Habitat India is instrumental in operationalising Habitat’s global advocacy for smart systems and policies that improve access to decent and affordable shelter on the ground. Indeed, Habitat for Humanity’s interventions in India contributes not only to India’s but to the Asia-Pacific region’s progress towards achieving sustainable development.

Narayan Adhikari has been nominated for the role of the Accountability Lab Nepal in generating a new, positive conversation on accountability; catalysing a new generative of active citizens and responsible leaders; and supporting change-makers to develop and implement positive ideas for integrity in their communities. The Lab is supporting a positive movement to build accountability with vis-a-vis its Integrity Idol campaign, a nationwide search for the top honest public servants; and provides substantive, flexible support for leaders who can collectively lead this movement within their respective contexts through its Accountability Incubator program.

Promoting a positive narrative: Accountability Lab launched Integrity Idol to flip the script on corruption. Integrity Idol campaign intends to name and fame the do-gooders, upstanding public servants who go beyond their job description despite the challenges. The Integrity Idol campaign continues to grow regionally and globally with discussions for further campaigns in East Africa and South Asia in 2019

Afran was nominated because of his role in leading the innovation of Bank Asia Limited that has changed the typical process of achieving financial inclusion nationwide. For example, the Bank introduced a non-traditional financial service delivery channel that brings millions of underserved and unbanked populations under banking umbrella and ensuring access to finance for that very segment. To share the best practices and knowledge for the betterment of the population worldwide.

Financial Inclusion is a frequently discussed topic in Bangladesh with more than 160 million populations, where a massive number of our population does not have access to formal financial services, and it is crucial to have them on board. According to the Financial Inclusion Insights, just over four in 10 (43 percent) Bangladeshi adults are now financially included.

Through this innovative agent banking model, the rural population of Bangladesh has a secured and convenient banking platform.

Nicolas Durier was nominated for his role as founder and director of Dreamlopments, a Thai-based non-profit social enterprise working on sustainable development for most vulnerable communities. Dreamlopments has launched the Migrant Fund (M-FUND) project along the Thai-Myanmar border, a low-cost, non-profit health insurance for unregistered migrants in Thailand.

It is estimated that there are 1-2 million unregistered migrants in Thailand. They contribute to building the Thai economy and infrastructure, and yet, they represent the only sub-population in Thailand who does not access free health care services. The M-FUND contributes to the true realization of Universal Health Care in Thailand, by giving access to comprehensive quality health care services for the last sub-population denied access to free care in the country.

The long term plan of Dreamlopments is to scale up their project along the Thai-Myanmar border and launch similar projects in other migrant communities in Asia.

Dr. Acharya’s work aim to bring creative, novel, low-cost approaches to some of the biggest causes of mortality and morbidity due to communicable and non-communicable diseases in Asia, specifically its rural areas. For example his NeMo technology is a low cost sensor that can effectively empower mothers in their rural homes to screen for signs of sepsis and neonatal illness.

Russell has been nominated for sharing his knowledge and teaching new methods of drilling bore holes to rural communities in Asia. Over a period of several years, Russell experimented with various methods and mathematical models that might work to install high quality reverse flow wells. Eventually a process was invented that had all the good properties of the reverse flow process while making the cost of the process cheaper than any other method. Russell’s technology allows for the drilling of higher quality and larger irrigation wells in locations where this was not previously possible.

Russell has shown leadership in the SDG’s by identifying a problem and working to alleviate the problem through innovation.

Sivilay has been nominated for the work of the Wildlife Conservation Society in Laos and its dedication to protect the environment and biodiversity of the area. Laos is suffering severe threats to its natural environment from a range of different factors.

The NEPL Programme involves a contractual payment to villages that was directly tied to the numbers of wildlife as well as payments for occurrences of hunting violations. The approach was designed to reduce illegal hunting pressure, increase wildlife sightings, and ultimately wildlife numbers, while generating ongoing economic incentives for conservation.

The organisation plans to expand their operations in Cambodia and Myanmar.

70% of Laos’ population live in rural areas. Thus, the management of protected areas and natural resources are crucial.

Carlos has been nominated alongside his team in the Philippines for the introduction of a WaterCredit Programme to help solve the water and sanitation crisis in the country. In a span of just 4 years, the WaterCredit program in the Philippines has already reached 1.8million Filipinos. Other programs have already been initiated and different collaborative ideas have been explored.

The team searches for innovative ways to collaborate with other players in the WASH industry so that the different facets of issues of water and sanitation are highlighted and potential solutions can be found.

Carlos and his team collaborate and partner with government institutions, NGOs, financial institutions and international leads in the water and sanitation sector to facilitate cross-sector collaboration.

The winner will be announced at the AIDF Asia Summit 2018 in Bangkok on 20-21 June 2018. Registrations for the summit will close very soon so don’t miss out, register here.

Do you know an individual who deserves recognition from their inspiring leadership? Nominate them for our AIDF Global Innovator of the Year Award!