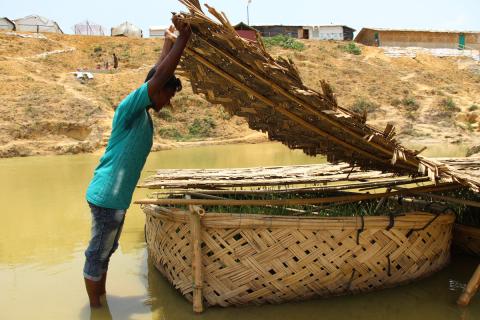 The UN Migration Agency, IOM, has distributed 2 million vetiver grass plants throughout Cox’s Bazar in the last 2 weeks in an effort to reduce soil erosion and the risk of landslides in the refugee camp.

In addition, local and international NGOs will be provided with a further 2 million plants in the next week.

The project is a low-cost high-return initiative; the plants cost just over $1.50 for 200 plants but could have a dramatic impact in stabilising land. For example, 200 plants can stabilise an area equivalent to 150 football fields.

Over 700,000 Rohingya refugees have entered Cox’s Bazar, Bangladesh since August 2017. Due to the large influx people, land was cleared of vegetation to make space for refugees leaving it highly vulnerable to landslides.

According to the IOM around 200,000 are at risk from landslides and flooding during the approaching monsoon season and the entire refugee population is vulnerable to water borne disease and limited access to vital services.

“We drew on Bangladesh University of Engineering and Technology studies to learn lessons from other projects involving vetiver grass and apply them here. The illustrations helped share that knowledge with people in a very practical way”

“It’s been really encouraging to see everyone getting involved. The project has also helped in raising public awareness of the risks of soil erosion. We will be following up with a fuller analysis of the impact next month, but initial reports from our partners indicate it has been going very well and is proving popular with the refugee community”

The grass is a component of the IOM’s wider land stabilisation plans and represents just one method being employed to protect the community.

The plants require watering twice daily and are being cared for by volunteers, participants in cash for work programmes and families in the community.

IOM are also constructing access roads, improving drainage, buildings bridges and preparing the ground for the heavy rain of the monsoon season. So far less than a quarter of the IOM’s appeal to support the refugees throughout the year has been secured.