Nepal eliminates trachoma, the first country in South East Asia to do so 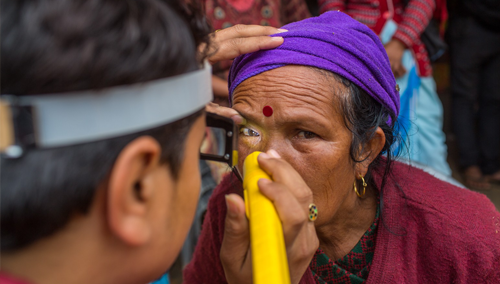 The World Health Organisation has confirmed that Nepal has eliminated trachoma as a public health problem. The country is the first in the South East Asia region to overcome the leading infectious cause of blindness.

The disease thrives in crowded living conditions with water shortages, inadequate sanitation and where eye seeking flies are present. Infection spreads from person to person, particularly from child to child and from child to mother. It is often first encountered in childhood.

In areas where trachoma is endemic prevalence rates can be as high as 90%. The disease causes visual impairment, blindness and a worsening of life experience and typically affects the poorest members of society. Women are also 2 to 3 times more likely to be infected.

In Nepal, Trachoma was the second leading cause of preventable blindness in the 1980’s.

“It is a big step towards health for everyone and comes at a time when Nepal accelerates its fight against other neglected tropical diseases.”

The Government of Nepal increased its efforts to eliminate the disease in 2002 with the development of a national trachoma programme. Between 2002 and 2005 the prevalence of trachoma fell by 40%.

The national trachoma programme collaborated with Nepal’s Ministry of Education to include a module on trachoma in the school curriculum.

“We managed to accelerate awareness about the disease and sanitation through education campaigns involving brochures, posters, flipcharts, radio announcements, and programmes in schools and village health centres”

In addition, approximately 30,000 operations were provided for trichiasis and 15 million doses of azithromycin, an antibiotic for bacterial infections, were distributed.

“Other factors that boosted control and elimination activities included funding from and excellent coordination among key partners and donors.”

The Government also provided incentives to local communities and districts to build latrines to improve sanitation.