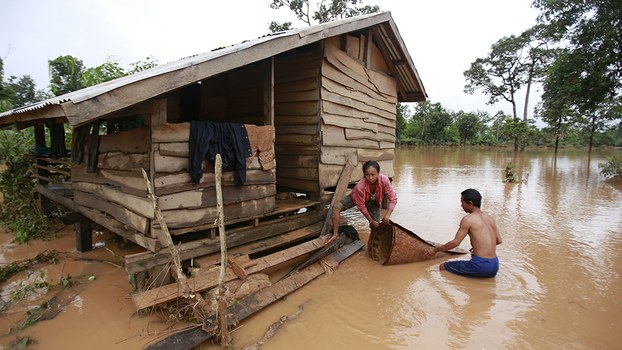 Last week, on 23 July, the Saddle dam D, one of five dams in the XePian Xe-Nam Noy Hydropower project in Lao DPR failed and flooded eight villages along the Xe-Pian River, a tributary of the Se Kong River which flows into the Mekong.

The dam was 90% complete and due to begin commercial operations in 2019.

There are reports that 29 people have been killed and 131 have officially been reported missing; however, there are concerns that the number of casualties could rise. The Province’s Deputy Secretary has claimed that 1,100 people were unaccounted for, as of 27 July.

Approximately 3,000 are thought to still be stranded. The UN’s humanitarian agency has reported that roads and bridges have been severely damaged, with helicopters and boats the only way to reach remote and worst affected areas.

Schools are being used as evacuation centres and around 1,300 families need tents for shelter. So far, a reported 2,851 people have been rescued.

Authorities are now beginning an investigation into what caused the dam’s collapse – heavy rainfall, inadequate construction or combination of both.

The dam is a joint venture between companies from Lao DPR, Thailand and South Korea, who are all assisting with rescue and restoration as well as assessing damage and the cause of the disaster. South Korean company SK Engineering & Construction, the main partner in the project, has blamed the collapse on heavy rain.