One year on, conditions in Cox’s Bazar are “grossly inadequate” 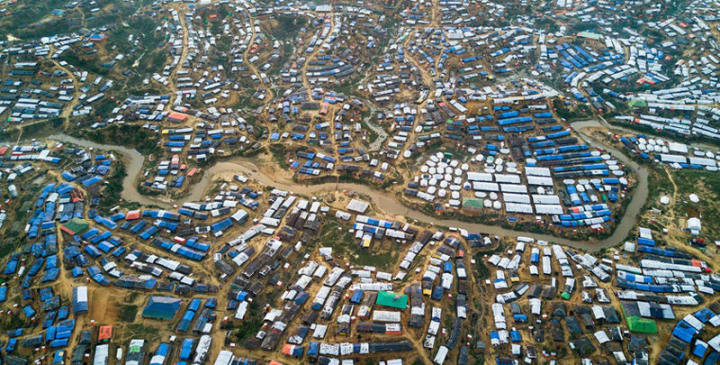 This August marks the one year anniversary of the start of the Rakhine crisis which forced around 1 million Rohingya Muslims to flee their homes in Myanmar, over 700,000 of which now live in Cox’s Bazar refugee camp.

The Cox’s Bazar camp stretches across 6,000 acres and has a population density of 60,000 per square kilometre, one and a half times more than the world’s most densely populated city of Manila.

Francesco Rocca, President of the International Federation of Red Cross and Red Crescent Societies (IFRC) commented on this:

“This is equivalent to 75 families living in an Olympic-size swimming pool. This is grossly inadequate and completely undignified. But is particularly difficult given that this crisis is so protracted, and that these camps are so exposed to monsoon rain and tropical storms”

Most refugees are living in makeshift shelters, constructed from bamboo and plastic sheeting, which offer little protection against poor weather and cold condition. During the monsoon season thousands of these shelters have been flooded or washed away.

Across the camp there are over 100 projects that target the host communities. Currently, 20,250 families receive livelihood support, over 25,000 participate in cash-for-work initiatives and 2,150 have received agricultural inputs training.

The protracted crisis has placed strain on the local resources, infrastructure, public services and economy. For example, increased pressure on the environment has led to a scarcity in firewood.

Prior to the Rakhine crisis, 1 in 5 households in the Cox’s Bazar region had poor food consumption patterns and 33% lives below the poverty line. The arrival of the Rohingya refugees has exacerbated problems as farmers sell rice for increased prices and land is rented to NGOs at a premium cost.

Despite this, Bangladesh and its people have been praised for their response to the crisis.

“The generosity of the Bangladeshi government and host communities should be recognized - without it, this crisis would have become a catastrophe. We are simply calling for a political solution to this crisis. People who fled from Rakhine cannot be expected to face another year in these conditions. They deserve more than this.”

Humanitarian workers are looking at how they can further reduce poverty and improve social cohesion between the Rohingya and Bangladeshi communities.

The Rohingya and host community response is governed by a Joint Response Plan that targets 335,900 Bangladeshis in seven unions closest to refugee camps and promotes programmes that benefit both the host and refugee communities. Under the plan 20% of funding is designated to projects that support host communities.

Prior to the monsoon season a number of humanitarian agencies worked to improve the infrastructure of Cox’s Bazar and better prepare the area for severe weather. The investment has benefited both host and refugee communities, and now as the priority shifts to improving healthcare facilities both will benefit again.

“As an example of how projects reach and serve both communities, we are seeing young mothers from the local community choosing to come and give birth in IOM health facilities inside the camps, as well as in the government clinics supported by IOM which largely serve the host communities”