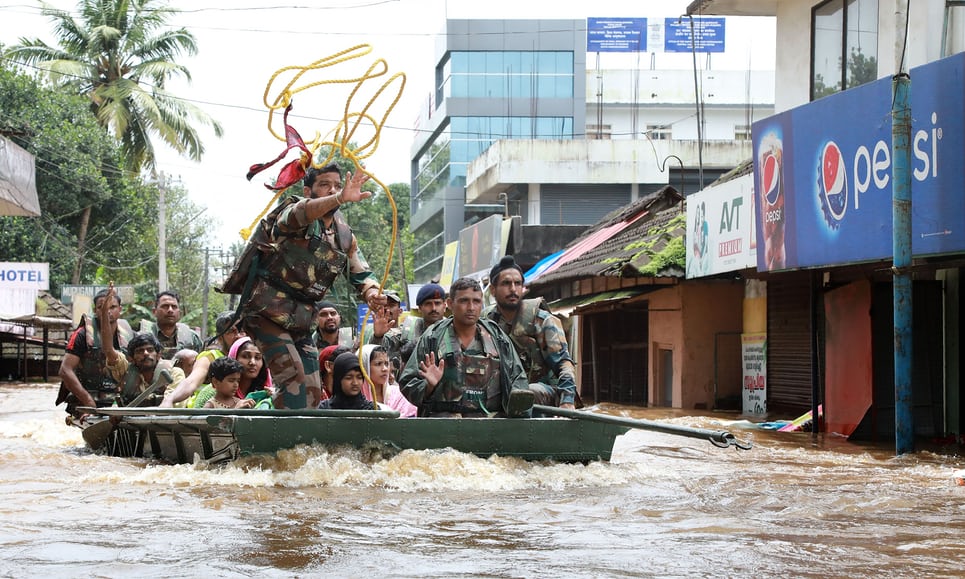 Flooding in the Indian state of Kerala has killed 324 people with the death toll expected to rise. Torrential rains and strong winds have been affecting the country for three weeks and the region has 30% more rain than its annual average. As Kerala’s rainy season typically lasts till November there are concerns that the situation could become much worse.

The state of Kerala is familiar with intense rains as it lies in the path of the south west monsoon that provides India with 70% of its annual rainfall over 4 months. However, the authorities were overwhelmed when Kerala had an average of 37.5% more rainfall than usual, with the worst hit areas receiving 83.5% more rain than expected.

Latest reports suggest that 1,287 or Kerala’s 1,553 villages have been affected and over 680,000 people are sheltering in relief camps, an additional 10,000 people were thought to be stranded on rooftops or high floors of homes on Saturday.

Local authorities have estimated that the flooding has caused $3 billion worth of damage with 134 bridges having suffered damage, 24,000 hectares of agricultural land lost, 2000 houses destroyed and 9000 houses partly destroyed.

Around 6,000 miles of roads have been submerged or buried by landslides and the major international airport in Cochin will remain closed until 26th August.

The Indian Prime Minister, Narendra Modi, has pledged an additional £56 million in financial assistance and compensation for the families of the dead.

On Friday the Indian military, disaster management teams and volunteers launched 82,000 rescue operations. However, the rescue efforts have been hampered by president rain.

Authorities have also urged for extra food, water and medical supplies for those living the 1,500 relief camps around the state. In the areas of Malappuram, Palakkad and Kozhikode more than half of the population does not have drinking water.

The flooding has been labelled the “worst floods in 100 years” by Chief Minister Pinarayi Vijayan.