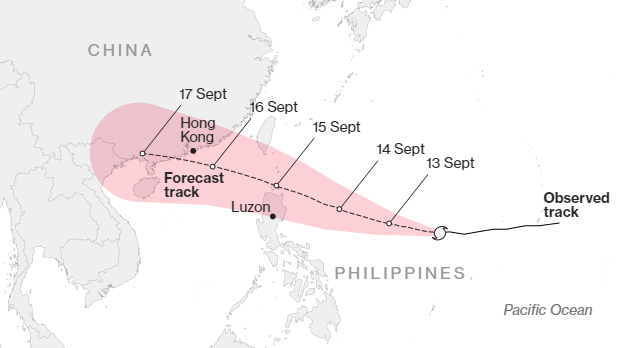 After rain inundated India and Typhoon Jebi ravaged Japan, millions of people in Southeast Asia are now bracing for Typhoon Mangkhut. The storm, known locally in the Philippines as Ompong, is expected to make landfall Saturday morning.

The strength of Typhoon Mangkhut is being compared to that of a Category 5 Atlantic Hurricane. The storm is expected to bring heavy rains and damaging winds to islands and coastal areas.

The storm has already swept through the US territory of Guam, causing floods and power outages across the island. As the storm continues on, the Global Disaster Alert and Coordination System said up to 43.3 million people could be affected by the storm in the Philippines and Southern China.

According to a report from the International Federation of Red Cross and Red Crescent Societies, Red Cross emergency response teams, search and rescue teams, water, sanitation and health units, and local community volunteers in high-risk areas are on standby.

Richard Gordon, the Chairman of the Philippines Red Cross said:

“We’re worried for the 10 million people in the Philippines living in the path of this destructive storm, including those who have been displaced several times due to the monsoon rains last July and August. We are preparing our emergency assets and relief items. Our staff and volunteers are on high alert for possible deployment.”

Although the storm is currently registering wind speeds of up to 260 kilometres per hour, experts believe it will weaken before making landfall this weekend. It will still bring heavy rains, strong winds, and could have devastating effects on agriculture and crops.

Philippines authorities warned that this super typhoon could cause up to $250 million in damages to rice and corn crops in the region. Locals in coastal areas must be evacuated by Thursday when the heavy rains are expected to begin.

Meteorologists are continuing to track the storm’s path and hope to see it weaken before it makes landfall this weekend. Typhoon Mangkhut is making its way through the Pacific just as Hurricane Florence, a Category 4 storm, is set to hit the south eastern coast of the United States.