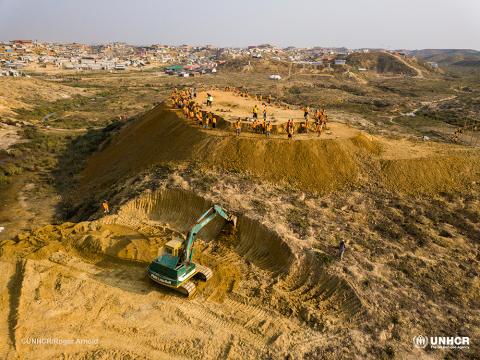 The refugee camp of Cox’s Bazar is readying itself for the approaching monsoon season with healthcare initiatives and relocation programmes.

Over 700,000 refugees have fled Myanmar since August 2017, with around 900,000 Rohingya refugees living in Cox’s Bazar. The majority live in poor conditions and unstable housing, monsoon poses serious threats of flooding, landslides and disease in the camp.

Estimates have suggested that 200,000 people in Cox’s Bazar are at high risk of flooding and landslides.

The project involved the UN Migration Agency (IOM), the UN Refugee Agency (UNHCR) and the World Food Programme (WFP) and required dozens of machines and over 3,500 labourers to prepare the land to relocate families. Both refugees and host families were involved in the labour process.

The new plot is 12 acres in size and will support 500 families currently living in the most at risk areas. The plot also offers water, hygiene and education facilities.

“With the monsoon season almost upon us, we will continue to work urgently to prepare more land, coordinate services, secure vital access and ensure we are ready to respond to emergency situations when they arise”

The government has allocated 500 acres for relocation, but due to the hilly landscape only a small percentage of this land can be made safe and used before the monsoon season which is due to begin in June.

“WFP engineers are building bridges, roads, preparing land for safer relocation, fortifying embankments and clearing drainage channels. We are working to ensure that we can reach all refugees with food and non-food items, if and when an area become inaccessible during the monsoon’’

The World Health Organisation and its partners have also launched a vaccination campaign to try and prevent a cholera outbreak during the monsoon season. In total, 1 million people in Cox’s Bazar will receive the vaccination. The campaign will be run by WHO, UNICEF, icddr,b and other NGOs.

This is the second vaccination campaign carried out by WHO, in October last year 900,000 vaccinations were provided to the most at risk.

“Considering the water and sanitation conditions in the overcrowded camps and the increased risk of disease outbreaks in the monsoon season, the health sector is taking all possible measures to prevent cholera and other water and vector borne diseases”

Almost 250 mobile vaccinations teams have been deployed to vaccinate all people over the age of one in the refugee camp and in the sub-districts of Ukhiya and Teknaf.

“We have managed to prevent the cholera outbreak since the first campaign in October last year, but flood water, heavy storms and landslides in the monsoon season could damage water and sanitation facilities in the camps, increasing the risk again of an outbreak of this dangerous disease. We have to take all initiatives to address the risk, including preventive measures through vaccination”

The vaccinations are being provided by WHO, UNICEF, Médecins sans Frontières and International Federation of the Red Cross.

UNICEF has also been scaling up its interventions on sanitation and hygiene to prevent disease spread.

The joint appeal from all key agencies working in Cox Bazar has secured 16% of the total $950 million needed for the response until the end of the year, $794 million less than is needed.