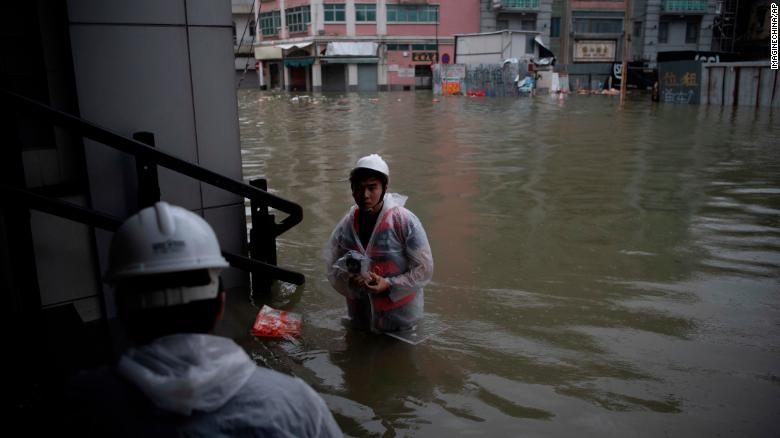 Over the weekend, Typhoon Mangkhut made its way through the Philippines to mainland China, killing dozens along the way. The storm reached Hong Kong on Sunday and is expected to weaken and move inland of western Guangdong on Monday.

The storm first made landfall in Cagayan province on northeast Luzon Island at 1:40 local time, packing winds of up to 270 kph (165 mph). The Philippines remain the worst hit, with 250,000 people affected across the islands and a current death toll of 54, with 32 people injured and 42 missing. Landslides are largely responsible for many of the deaths that have occurred, there have been a total of 51 reported so far.

At least 32 deaths have been confirmed in the small mining town of Itogon, where a landslide has buried several miners and their families. According to the BBC, rescue teams are digging through the rubble with their bare hands, passing blocks of concrete and pieces of wood down a 15 metre-long line to clear the area.

After the storm ravaged its way through the Philippines, it barrelled into Guangdong, China’s most populous province, making its landfall late Sunday afternoon. Four people died before the storm moved west into the neighbouring Guangxi province around midnight.

Hong Kong authorities had been warning residents to prepare for the storm for days, and Xinhua reported that 18,327 emergency shelters had been activated, and 632 tourism and 29,611 construction sites had been shut down. In addition, more than 550 flights at airports in Hong Kong, Shenzhen, and Guangzhou were cancelled, according to Flightaware.com.

While the storm has weakened from a high alert T10 storm into a T8 storm, winds of 63 kph are still expected as the storm heads inland towards Guangdong. As the storm fades into a tropical storm, attention will turn to relief efforts for the millions of people affected across the Philippines and China.