IOM has successfully relocated 12,000 Rohingya refugees ahead of monsoon season 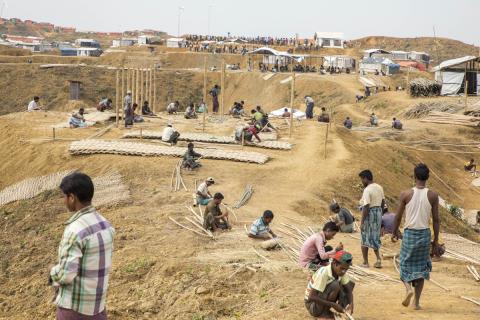 The UN Migration Agency, IOM, have successfully relocated 12,000 Rohingya refugees as monsoon storms have already begun in Cox’s Bazar, Bangladesh. The rains have damaged shelter and have increased the risk of landslides on steep slopes.

The IOM is urgently preparing to relocate 24,000 of the most at risk people before further storms begin.

The IOM has coordinated its efforts with the World Food Programme (WFP) and the United Nations High Commissioner for Refugees (UNHCR) to form the inter-agency Site Maintenance Engineering Project which is preparing new land for relocation.

Since August 2017 700,000 refugees have fled Myanmar and settled in Cox’s Bazar. The rapid and large scale influx led to many people settling on unstable slopes and living in overcrowded conditions, both of which make them extremely vulnerable during the monsoon storms.

This week the IOM confirmed 11,791 people have been located to protect them from flooding and landslides or to install infrastructure ahead of the monsoon. In addition, other agencies have relocated 3000 for similar purposes.

“The impact of the recent storms is a worrying indication of what people will face during the cyclone season and at the height of monsoon…there is no time to lose in supporting those at risk to move to safer ground. The work being done under the SMEP will help save lives.”

The areas where refugees are being relocated to also have key services such as water, hygiene and education facilities. Over the coming weeks around 40 acres of land will be prepared to accommodate relocated refugees.

Relocation is one of many techniques being implemented to minimise damage and protect the community. For example, health services and vaccinations have been increased and DFID has supported shelter reinforcement projects.